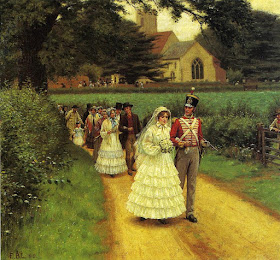 Until the last few years of the seventeenth century England was a land without divorce. After that, divorce was possible, but very, very difficult. “Between 1670 and 1857, 379 Parliamentary divorces were requested and 324 were granted. Of those 379 requests, eight were by wives, and only four of those were granted.” (Wright, 2004)

Before the Matrimonial Causes Act of 1857, which finally legalized divorce in the civil courts, divorce was governed by the ecclesiastical court and the canon law of the Church of England. The Church opposed ending a marriage. It only permitted a couple a ‘divorce’ that amounted to what we call today a legal separation. Parties could break up housekeeping and were no longer legally and financially responsible for one another. But, and this is the big one, they could not remarry.

To obtain the complete dissolution of a marriage and the right to remarry other people, Parliament had to step in and declare the couple an exception to the law of the land. Hence divorce truly required an act of Parliament.

The process could take two years and involve three separate trials. The first would be obtaining a ‘divorce’ (in today’s terms a legal separation) from one of the Consistory Courts. Then a criminal conviction proving adultery (criminal conversation) would be necessary. Finally, a Private Act of Divorcement would be brought before Parliament, which if granted, would dissolve the marriage.

Canon law allowed a separation (in the era called a divorce), called the divortium a mensa et thoro (separation from bed and board). The Ecclesiastical courts permitted it for certain specified causes. The causes were life-threatening cruelty and adultery by the husband, or adultery by the wife. This act allowed spouses to live separately and ended the woman’s coverture to her husband and his financial responsibility for her.

If a spouse, man or wife, simply ran off and deserted the other, the doctrine of coverture complicated matters, because they were still legally one person. A woman could not simply leave her husband’s home without permission. He could legally drag her back under his roof—and even soundly beat her for her efforts!

If she managed to leave, the wife had no access to moneys or properties from the marriage, everything belonged to the husband. Nor did she have any right to her children. They too belonged to their father—assuming of course he wanted them.

The only part of coverture that did not favor the man in this situation was that he remained liable for his wife’s debts whether she was in his house or not. So, if she could manage to get credit, her husband would be liable.

If a full parliamentary divorce was pursued, there were several acceptable reasons for divorce. Adultery was by far the most common. But, all adultery was not created equal. Adultery by the wife was considered sufficient grounds for a husband to obtain divorce. For the wife, adultery had to be aggravated by physical cruelty (if he beat her to the point of threatening her life), bigamy (which no one thought was a good idea) or incest (like sleeping with the woman’s sister, clearly a great idea, right?) 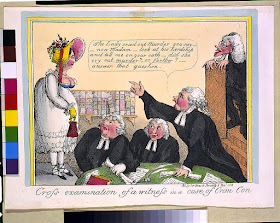 Since it was not against to law to sleep with another man’s wife, aggrieved husbands had to get a little creative in dealing with the problem. Civil laws concerning trespassing were used in bringing a wife’s lover to court since he ostensibly ‘wounded another man’s property', thus entitling him to financial compensation under civil law. If she ran off with her lover, the husband could also claim damages for the loss of her services as household manager, arguably one of her more valuable contributions to her husband’s household.The euphemistic name for the offense was ‘Criminal Conversation’ (crim con).

Interestingly, the wife was not a party a crim con suit, only her alleged lover. What’s more, women were not permitted to bring suit against other women for adultery with their husbands. (Remember the whole being property thing? That.)

A husband’s adultery was not thought to be as much of an injury as a wife’s since any children in the marriage were assumed to be the husband’s. His property and money would be spent on their upkeep and eventually be their inheritance. Clearly he had much more to lose in the matter than she did. So, in a divorce proceeding a woman had to prove both adultery and cruelty.

If she could not prove bigamy or that her husband was sleeping with a close relation, a woman was in the unfortunate position of having to prove him intolerably cruel.

Not surprisingly, a woman’s legal coverture made this difficult.


The husband also, by the old law, might give his wife moderate correction. For, as he is to answer for her misbehaviour, the law thought it reasonable to intrust him with this power of restraining her, by domestic chastisement, in the same moderation that a man is allowed to correct his apprentices or children; for whom the master or parent is also liable in some cases to answer.

So in short, a man had the right to severely beat his wife if he deemed it appropriate. Proving cruelty was then very difficult. It is comforting to think that Judge Buller amended this understanding somewhat, with his ‘rule of thumb’: A man could thrash his wife with a stick no thicker than his thumb.

A woman could petition the court that her husband inflicted cruel and unjust harm upon her. But to get the sympathy of the court, women had to paint themselves as passive and dutiful victims of truly inhumane treatment. It could be done, but it was difficult at best as evidenced in that of the three hundred twenty four divorces granted between 1670 and 1857, only four were granted to women. (Wright, 2004) 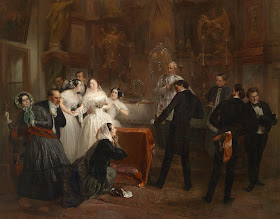 After receiving a legal separation from an adulterous wife and seeing her declared guilty in a crim con trial, a man could go his separate way, repaid for the damages of his wife’s infidelity. Only a few could afford (or were willing to take) the final step that would allow them to remarry as they chose, a parliamentary divorce.

Cost was not the only deterrent to a Parliamentary divorce. The proceedings were long, messy and very public. Few honorable men wanted their names and private business made part of the public press, to be enjoyed by the ‘Great Unwashed’. Moreover, simply being involved in a divorce proceeding was enough to get one shunned form good society and banned from (Royal) Court. So only three or four cases a year made it before Parliament.

When a Private Act (or Bill) of Divorcement was brought before Parliament, the bill had three readings before the Lords. Witnesses to support the allegations of (almost always the wife’s) adultery had to be present for the second reading. The wife though, could not testify on her own defense. Of course, because at this point, she still has no legal personhood separate from her husband.

If a divorce was granted, it overturned the property settlements made in the marriage articles. Parliament took on the responsibility of redistributing assets. Typically, the woman (since in almost all cases, she was the guilty adulterer) lost all her income, property and any right to see her children. Usually a woman was granted an allowance to maintain herself, just enough for food and housing in most cases. But, since she was not permitted to sue her ex-husband, the chances of her actually collecting that allowance were slim.

Although one of the advantages of a parliamentary divorce was the ability to remarry, a divorced woman could not remarry unless the divorcement settlement specifically gave her permission to do so. Clauses could be included in the settlement that would explicitly forbid her from marrying the man with whom she had committed adultery.

Get Me to the Church on Time: Changing Attitudes toward Marriage
To Have a Courtship, One Needs a Suitor
Nothing is ever that simple: Rules of Courtship
Show me the Money: the Business of Courtship
The Price of a Broken Heart
Making an Offer of Marriage
Games of Courtship
The Hows and Why of Eloping
Licenses, Laws and Legalities of Marriage
Short, Simple and to the Point: Regency Weddings
After the Wedding Comes a Marriage: Regency Marriages

Hager, Kelly. “Chipping Away at Coverture: The Matrimonial Causes Act of 1857.” BRANCH: Britain, Representation and Nineteenth-Century History. Ed. Dino Franco Felluga. Extension of Romanticism and Victorianism on the Net. Web. [Here, add your last date of access to BRANCH].

Jones, J.W. A Translation of all the Greek, Latin, Italian and French Quotations which occur in Blackstone’s Commentaries on the Laws of England . Philadelphia: T7JW Johnson&Co. 1905. http://www.mindserpent.com/American_History/books/Blackstone/trans_01.htm

Though Maria Grace has been writing fiction since she was ten years old, those early efforts happily reside in a file drawer and are unlikely to see the light of day again, for which many are grateful. After penning five file-drawer novels in high school, she took a break from writing to pursue college and earn her doctorate. After 16 years of university teaching, she returned to her first love, fiction writing.