The Tragic Life of Catherine Gordon

by Samantha Wilcoxson
Little is known about Catherine Gordon's early years, as history is much more careful about recording tragedy and scandal than everyday life. As a great-granddaughter of King James I of Scotland and daughter of the Earl of Huntley, Catherine likely enjoyed a charmed childhood and looked forward to a bright future. That vague dream of imminent prosperity became defined for her in a handsome young man proclaimed to be Richard of York.

Catherine is one of those women who would be wonderful to sit down to tea with and ask many of those questions that drive history enthusiasts mad. Did she think her Richard was truly Perkin Warbeck, the name later assigned to him by Henry VII? What was her impression of the first two Tudor kings? Catherine lived during fascinating times with close connections to some of the historical figures who continue to intrigue us the most. However, as with many who lived during the Tudor era, her life is a complex blend of joys and sorrows.

Whatever Catherine eventually ended up believing about her first husband, at the time of her marriage she would have been confident that she was marrying a Prince of England, one who was preparing to reclaim his kingdom with her at his side. The fact that Catherine was given to Warbeck in marriage is a significant indication of his belief in his claim.

While Warbeck was undoubtedly pleased with the status that Catherine gave him, he also seems to have been in love. A letter believed to be written by him states, "whoever sees her cannot choose but admire her, admiring cannot choose but love her, loving cannot choose but obey." Catherine appears to have returned his affection, accompanying him when he set out to invade England though she most likely was either pregnant or had a small child with her.

So began the string of tragedies in this lovely young woman's life.

Warbeck's 1497 invasion failed almost before it began, and Catherine was taken captive at St Michael's Mount where she awaited news of her husband's victory. Found wearing mourning clothes, it is believed that Catherine had suffered a miscarriage during her five weeks there. Records being unclear in the details, Catherine may have alternatively suffered the loss of a young child rather than a miscarriage. Either way, Catherine would bear no more children.

Catherine was treated with respect by Henry and became an attendant for his wife, Elizabeth of York. She was informed that her husband was a pretender. What Catherine thought of all this, we can only imagine. The fact that records exist stating that "Henry was treating the couple well enough, but would not let them sleep together," indicate that Catherine still loved her husband, whoever he really was. She remained at the Tudor court, whether she was a well-treated prisoner as her great-grandfather had been or she chose this path is unknown.

In 1499, Warbeck was executed under suspicious circumstances, and Catherine found herself a childless widow of twenty-five at a foreign court. Catherine became close to the royal couple, serving as one of Queen Elizabeth's ladies and eventually mourner at her funeral in 1503. She remained with Henry after he lost his wife, indicating that she had forgiven him for any wrong she may have felt he had done to her or her first husband.

Around this time, Catherine married her second husband. Little is known of James Strangeways besides the fact that he was Gentleman Usher of the King's Chamber and that he did not survive long after his marriage to Catherine. By the summer of 1517, Catherine was married a third time. This marriage and a role in Princess Mary's household took Catherine a greater distance away from the English court than she had been in twenty years.

Matthew Craddock was a Glamorganshire knight with holdings in Wales. Catherine was able to divide her time between Princess Mary's household at Ludlow and that of her husband. Catherine loved to explore her estates on horseback, and this is an activity she found great refuge in throughout her life. Based upon Catherine's will, written in 1537, Craddock held a special place in Catherine's heart. Though the document refers to Catherine as the "sometime wife" of Strangeways, Craddock is referred to as her "dear and well beloved husband."

Catherine served as Chief Lady of the Privy Chamber for Princess Mary while Margaret Pole served as Governess. These two women were of an age together and likely struck up a friendship at this point if they had not previously. They would be protective of their charge as the political environment deteriorated, causing the downfall of Mary's mother, friend of both women, Queen Katherine of Aragon. Catherine served in this role until 1530, but Margaret stayed until she was forced to leave in 1533.

In the meantime, Catherine had lost her third and gained a fourth husband. Craddock's death in 1531 may be an indication that Catherine had left Princess Mary's household when she did in order to care for him. It is not known precisely when Catherine married her final husband, but he would be the one to survive her.

Christopher Ashton, another Gentleman Usher, was from Berkshire, where Catherine held lands that had been gifted to her by Henry VII. When not at court before her move to Wales, this is where she had taken up residence. Her final marriage was brief and little is recorded of it besides Catherine's final will and resting place.

When Catherine died on October 14, 1537, she was sixty-three years old. A surviving monument to her exists within the Parish Church of Fyfield in Berkshire where she is buried. Another monument had been raised by Craddock in Swansea, indicating his doubts that she would remarry after his death. Her will makes no mention of her first husband, and there is no existing record of her discussing him at any point in her life after his death. Whatever she thought of Perkin Warbeck had died with him. Eventually, Ashton was the husband to be buried next to the much admired Scottish noblewoman when he died in 1561. 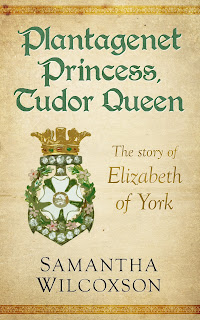 Samantha Wilcoxson is a first generation American with British roots. She is passionate about reading, writing, and history, especially the Plantagenet dynasty. Her novel, Plantagenet Princess, Tudor Queen: The Story of Elizabeth of York has been recognized as a Historical Novel Society Editor's Choice.

Samantha has also published two middle grade novels, No Such Thing as Perfect and Over the Deep: A Titanic Adventure.

When not reading or writing, Samantha enjoys traveling and spending time at the lake with her husband and three children. You can connect with Samantha on her blog, Twitter, Goodreads, Booklikes, and Amazon.