The Gentrification of Food - Dining in the Stuart Era

'Ah, what an excellent thing is an English Pudding!'
Memoirs of Maximilien Misson - 1690


After the dissolution of the monasteries in the previous century, vast swathes of land were sold off and developed by landowners, creating a new breed of landed gentry. Medieval monastic ideas of managing the land were swept away, and new and prosperous estates created. From the beginning of the seventeenth century this affluence (for the few at least) enabled more trade and travel abroad, and more visits to the capital, allowing foreign influences and the fashions of the Court to spread.

This absence from home provoked Parliament to issue proclamations urging landowners not to shirk their duties, but to to return home. The proclamations were largely ignored, though, and the well-to-do flocked to fashionable London - to its theatres, coffee shops and markets.

London soon became the centre of a burgeoning demand for foreign delicacies, and new and tantalizing tastes. In the seventeenth century the lady of the house was expected to keep up with these ideas and a rash of recipe books were published in this century. The French court was enormously influential and France was the most common source of the new ways of cooking. the term 'A la Mode' (in fashion) was used to describe the new French way of cooking. Below, a recipe book from 1660.

'she and I, to go to a French house to dinner, and so enquired out Monsieur Robins, my perriwigg-maker, who keeps an ordinary, and in an ugly street in Covent Garden, did find him at the door, and so we in; and in a moment almost had the table covered, and clean glasses, and all in the French manner, and a mess of potage first, and then a couple of pigeons a la esterve, and then a piece of boeuf-a -la-mode, all exceeding well seasoned, and to our great liking; at least it would have been anywhere else but in this bad street, and in a perriwigg-maker’s house'

Previously, in the provinces, the diet of the poor had remained basic, being built around bread, coarse hard cheese, and meat and fish where available. Now for the rich, deer parks and fish ponds supplied venison and fish (which for religious reasons had to be eaten at least once a week). It was thought that rabbits did not breed well in the wild and so pillow mounds were constructed as easy places for rabbits to dig their warrens. Rabbit was a popular pie.

For the poor, potage (soup/stew) continued to be the staple diet. About half the population could afford to eat meat every day, but the poorest could only eat it once a week. Meat and fish were preserved by salting. Commonly eaten meats were mutton, pork, beef, venison and chicken or game-birds - such as pigeon, and partridge. Potatoes from Virginia were grown on rich estates, but were considered a novelty.Turnips, parsnips and beans provided the 'filler' in a meal, along with bread. A new interest in gardening in this century led to a wide range of fruit being grown. See this article about women gardening in the 17th century.

In this period the English pudding as we know it was invented. Up until this time puddings were always savoury, made of off-cuts and trimmings of meats forced into animal gut. Tying sweet ingredients into a muslin cloth - the 'pudding cloth' became very popular and soon spread through the whole country.

There were three main meals, breakfast, a mid-day meal and supper, taken in the early evening. Breakfast was whatever was available - cold meats, leftovers, bread, washed down with weak ale. There were only two or three courses. each course comprised a variety of sweet and savoury dishes in a kind of buffet. The final course was a 'banquet' of sweetmeats and fruit, and was the ideal opportunity to sample small rare fruits from abroad or marchpane (marzipan) flavoured with spices from the Indies. At supper a single course was usual, made up of numerous dishes. In the era before refrigeration, people were more concerned about waste, and much food was recycled.

The Great Hall had been the place for eating in previous centuries. Everyone ate together, but seated in hierarchical order. Now a new fashion for privacy from the servants emerged, and the dining room was born. Usually converted from a parlour, these became of great importance. It was the beginning of the idea of 'upstairs and downstairs' which persisted until the Edwardian era. Typically, the dining room was designed to display wealth and status. Embossed gilded wallpaper, fancy ceiling mouldings, ornate fireplaces, and a table full of sparkling cutlery and plate were essential.

Above is the restored Dining Room at The Merchant's House in Marlborough. The design, dating from 1665 but only re-discovered in 1991, was probably inspired by silk wall-hangings imported by Thomas Bayly from the Netherlands. Tho our taste, the large vertical stripes over a dark green background, is probably very odd. The decoration even covered the doors! The surviving probate inventory of 1690 lists "12 Turkeywoorke Chairs". In 1672, 60,000 of these were were manufactured in London alone, so they were obviously very popular. (figures via the Merchant's House website).On paintings of the period these Turkish 'carpets' were often seen used as tablecloths and cushions.

Dining tables and furniture were dark, heavy and hard-wearing. Benches were often set either side of a table to eat, individual chairs were reserved for the rich. Though at the end of the Stuart period oak was scarce from The Civil War and building ships to fight the Dutch, and lighter softer woods made it easier to maker individual chairs.

If you sat down at table you would find your food served on a wooden or pewter plate. Pewter was used to make drinking cups, dishes, serving platters and plates. Pewter is an alloy of tin, lead and copper and a very soft metal. It was maintained and polished by servants burnishing it with sand to remove the scoring of cutlery. The poor, however, still used wooden plates. Some rich men had silver plate, kept in a 'plate cupboard'. in 1670 Prince Rupert purchased five dozen silver plates from Alderman Blackwell. Each plate weighed nearly 18 ounces, making the plate worth at least £300 ($425) - a fortune
Forks? What be they?
The laudable use of Forks
Brought into custom here, as they are in Italy,
To tghe sparing of napkins.'
Ben Johnson 1616

Plate was also an investment that could be melted down if you needed ready cash - something which was often the case in the English Civil Wars. In the early 17th century, a three-tined fork appeared for the first time, as before this time, most forks were two-pronged, and used to hold down a cut of meat. Apparently, Montaigne, writing in the 1570 mentions forks, but says he rarely uses them. It was only when people wanted to equip a dining room for guests that they became more common. Because forks could spear the meat, the knife evolved to have a more rounded shape like the ones we use today. 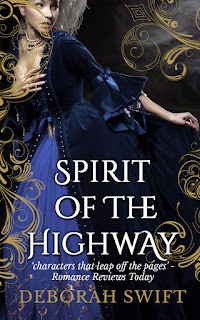 I am the author of five books set in this period. Find out more about me by clicking the book. I would love some more reviews for my latest book, (pictured left) so click here to email me for a FREE review copy. Offer ends midnight 24th January 2016 GMT!

'Spirit of the Highway' is the stand-alone second part of the Highway Trilogy for teens (and adults!) based on the real life and legend of Lady Katherine Fanshawe, highwaywoman.

Look out for my new novel coming soon: Pleasing Mr Pepys
Deborah Swift at 1:00 AM
Share