The Stone of Destiny

Unless the fate shall faithless prove,
And prophets voice be vain;
Where’er this sacred Stone is found,
The Scottish race shall reign. 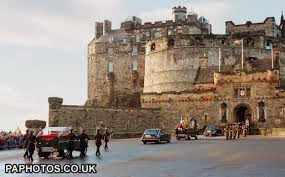 On St Andrews Day, 30 November 1996, 700 years after being stolen by King Edward I of England, the Stone of Destiny was brought back to Scotland with great pomp and ceremony.

But was it the real Stone of Scone, the ancient crowning stone of the Scots?

The origin of this sacred icon, fought over by the English and Scots, has been lost in the mists of time, and doubts about its authenticity have never been fully quashed. Legends about it abound and while giving a brief outline of its history, I take the liberty of weaving my own yarn into the story.

In 1296, having slashed and burned his way through Scotland, Edward Langshanks battered down the door of the Abbey of Scone and demanded that the Stone of Destiny be delivered up to him. For centuries, the Stone had been used as the seat of coronation for Scottish monarchs, and taking possession of this potent symbol of independence would send a powerful message to the rebellious Scots: that the English king, the Hammer of the Scots, was Lord Paramount of Scotland.

As he paced up and down waiting for the fabled stone to be delivered up, what was Edward expecting? Was it indeed Jacob’s Pillow, on which the biblical patriarch rested his head as he dreamt of angels ascending a ladder to heaven? Said to be the fragment of a falling star, this mythical stone would be made of black basalt or some mysterious, supernatural substance.

When the Temple of Jerusalem was looted Jacob’s Pillow was spirited away to Egypt where it became known as the Pharaoh’s Stone. What if this sacred relic coveted by the acquisitive Egyptians were sculpted out of pure white marble and inlaid with precious stones? That would be a prize well worth seizing.

After eloping with a Celtic prince Princess Scota, the pharaoh’s daughter, took the Stone to Ireland. Some time in the 5th century the princess’s descendants, the Scotti, brought the stone to Dalriada (Argyll). Then, c. 850 A.D, Kenneth MacAlpin, conqueror of the Picts, was crowned King of Scots at Moot Hill near Scone in present-day Perthshire. Sometimes referred to as the Hill of Faith or Belief, the Hill was created by sand taken there in the boots of those lords who had sworn allegiance to the Scottish king. 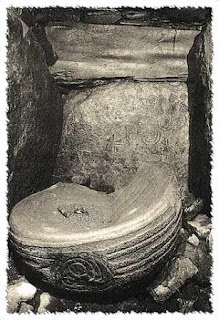 But was it the Tanist stone, known in Gaelic as An Lia Fàil, one of the four great treasures used in the coronation of Irish kings? Blessed by St Patrick the holy relic had been carted off by St Columba to Iona as his altar. During the Viking raids the Stone was moved to Scone Abbey for safekeeping.

This mythical stone, no doubt decorated with elaborate Celtic knot-work and covered in intricate carvings, was reputed to have magical properties. An Lia Fàil, ‘the great stone of fate or destiny’, not only groaned aloud when the true king of Scots sat on it but had the power to rejuvenate those who were crowned upon it. Said to be round, hollowed, and partly shaped like a chair or throne, it matched the description of the stone given by Walter of Guisborough who had attended the coronation of John Baliol in 1292. Whatever its origins, whatever its form, Edward coveted this touchstone of Scottish nationhood. 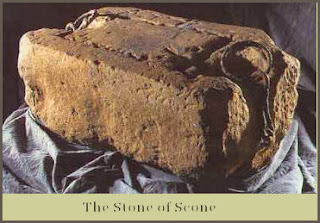 And so when the monks deposited a chunk of coarse-grained red sandstone at his feet, the English king would have gaped in astonishment.

The legendary talisman looked no different from the building blocks of the abbey, quarried from the hills around Scone. Not by any stretch of the imagination did it resemble a throne or a chair or a royal seat: on the contrary, the lump of stone with iron rings at each end bore an uncanny resemblance to the cover of a cess-pit.

King Edward’s eyes narrowed in suspicion and he clenched his fists in anger.

‘But this is no more than a hunk of rock!’ he spluttered.

Were these Scots’ monks making a mockery of him? Had they hidden the real stone?

The Abbot of Scone stepped forward. ‘I well understand your doubts, Your Grace, but consider this.’

He held up a chalice and took out a communion wafer. ‘Behold, this wafer is no more than a plain sliver of bread until the holy sacrament of the Eucharist transmutes it into the body of Our Saviour, Jesus Christ. As a Christian, do you believe in this miracle, Your Grace?’

‘In the same way,’ the abbot went on, ‘we believe that because this humble slab has been consecrated with holy water by saints and men of God, whoever is crowned upon it becomes one of God’s anointed. There’s no joukerie-pawkerie here.’

And to reassure the king, perhaps he added, ‘Since biblical times our sacred Stone has been transported from place to place: these two iron rings are there for ease of movement, Your Grace. Take our blessed throne in good faith.’ 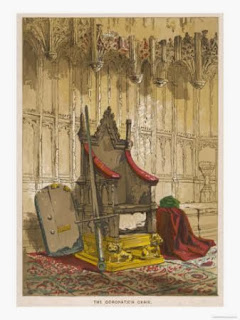 Was the Hammer of the Scots taken in by this explanation or did he suspect his ‘lang shank’ was being pulled by the auld enemy? Whatever he believed Edward had no alternative but to claim his booty and cart it back to London where the Stone was fitted into an oak throne and installed at Westminster Abbey.

Since then, some 30 royal bottoms have sat upon King Edward’s Chair for their coronation. But were they crowned upon the legendary Stone of Destiny or the lid of a medieval toilet? Edward was still not convinced for in 1298 he sent a raiding party of knights back to Scone to rip the abbey apart in a desperate search. Whatever they were looking for, they returned empty-handed.

Then, in his Monuments Celtiques, 1805, Jacques Cambray claimed to have seen the stone when it bore the inscription:

The poetic translation being passed down as:

Unless the fate shall faithless prove,
And prophets voice be vain;
Where’er this sacred Stone is found,
The Scottish race shall reign.

But there is no such inscription on the present Stone and, since Cambray believed in a ‘stone’ cult and its connection with the Druids, this is probably another myth. 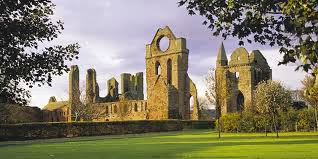 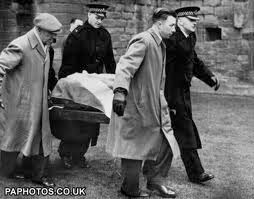 The plot thickened when on Christmas Day, 25 December 1950, the Stone was allegedly ‘stolen’ from Westminster Abbey. But was it theft? Who owned it? Had the English not stolen it from Scotland in the first place? The Stone turned up a few months later on 11 April 1951. Following a tip-off, the police found the Stone draped in a blue and white Saltire – the national flag of Scotland – in front of the high altar of the ruined Abbey of Arbroath.

The choice of location was deliberate for it was there that the famous Declaration of Arbroath had been signed in 1320. In it the lords, commons and clergy of Scotland reaffirmed the right of the Scots to live in freedom: 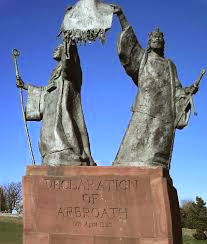 ‘For as long as one hundred of us remain alive, we will yield in no least way to the domination of the English. We fight not for glory nor for wealth nor for honours, but only and alone for freedom, which no good man surrenders but with his life.’

Perhaps this declaration of liberty is one reason why none of the Scottish nationalist students who had appropriated the Stone were ever prosecuted. (A film of the heist Stone of Destiny, was made in 2008.)

The Stone was then promptly dispatched to Westminster – but which one? During the robbery – or repatriation – the Stone had been damaged and was taken to a Glasgow stonemason for repair. Did he also make several copies of the stone? There is at least one acknowledged copy on public display at Scone Palace in Perthshire – might there be others? 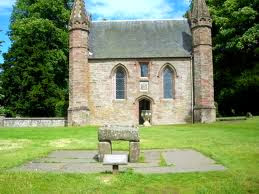 And, if so, the stone that was returned to London might not even be the original rock that had been palmed off on Edward. That is what Scottish activist Wendy Wood would have us believe. For in 1968 she slipped a note under the iron railing at Westminster Abbey:


‘This is not the original Stone of Destiny. The real Stone is of black basalt marked with hieroglyphics and is inside a hill in Scotland.’

But is this true? If the Coronation Stone is a fake, what fate befell the real Stone of Destiny? Some say that Robert the Bruce took it to Dunstaffnage, or Iona, or Skye. Others insist that the monks buried it on Dunsinnan Hill above Scone where the secret of its location has been closely guarded and passed down the generations by word of mouth from father to son.

The Stone was returned to Westminster in time for the 1953 coronation of Queen Elizabeth, the second of England, the first of Scotland. 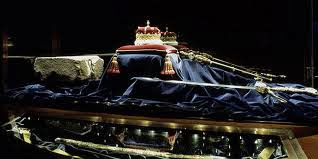 But in 1996, in response to growing dissatisfaction among Scots, the conservative government agreed that the Stone of Destiny should be returned to Scotland. It was installed in Edinburgh Castle, taking its place alongside those other symbols of national identity, the Scottish Crown Jewels.

In a service at St Giles cathedral, the Church of Scotland Moderator formally accepted the Stone's return, saying it would ‘strengthen the proud distinctiveness of the people of Scotland.’

As part of the agreement the Stone – or the toilet seat lid – will be returned on loan to Westminster Abbey for the coronation of the next British monarch.

For after 700 years, the authenticity of the Stone on display at Edinburgh Castle is still uncertain. Like Nessie, the Loch Ness Monster, the Stone of Destiny has joined the pantheon of Scotch myths that should perhaps remain a mystery.

I am also indebted to the following websites:
Undiscovered Scotland
The Paisley Tartan Army
Scottish Scribbles

Born and bred in Scotland, Marie Macpherson went on to study Russian language and literature, gaining a  PhD on the Russian writer, Lermontov, said to be descended from the Scottish bard and seer, Thomas the Rhymer. Though she has travelled widely she has never lost her love for the rich culture and history of her native land.  Now retired from academic life she has taken up writing historical fiction.

Her novel, The First Blast of the Trumpet – the first in a trilogy -– is a highly entertaining fictional account of the controversial Scottish reformer John Knox, based on his early, undocumented life.

A mini-documentary showing the historic locations featured in the novel can be viewed on YouTube under the title,
John Knox and the Birth of the Scottish Reformation:
http://www.youtube.com/watch?v=40PV0rll6dw


The novel is available in hardback, paperback and e-book and can be purchased at bookshops or online at:
Amazon UK
Amazon US

More information can be obtained from Knox Robinson Publishing website.

Latest Review from Undiscovered Scotland: What a magnificent book!  We have now published our review, which can be seen online here:
http://www.undiscoveredscotland.co.uk/usreviews/books/krptrumpet.html

Comments with opposing viewpoints are allowed if they are not written in an unnecessarily confrontational or arrogant manner.