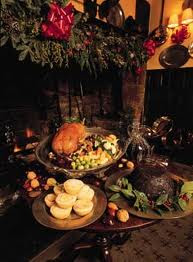 In Shakespeare's Day it was more usual to give gifts at New Year, but if you were lucky you might receive one at Christmas. Christmas gifts were known as Christmas Boxes and were usually given by a master to his servants, or an employer to his apprentices or workmen. They were a mark of appreciation for work done over the previous year.
New Year's gifts were a more equal exchange between friends or relations.
So what might you expect in a Tudor christmas stocking?
Maria Hubert in her book "Christmas in Shakespeare's England" suggests that Shakespeare might have enjoyed receiving paper as it was very expensive, a new quill pen, or a knife with which to sharpen it. 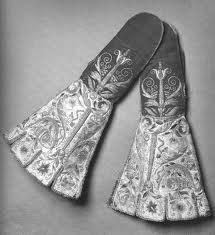 Well in Shakespeare's "The Winter's Tale" a pedlar is selling:
Lawn as white as driven snow,
Cyprus black as e'er was crow,
Gloves as sweet as damask roses;
Masks for faces and for noses,
Bugle bracelet, necklace amber,
Perfume for a lady's chamber;
Golden quoifs and stomachers
For my lads to give their dears." 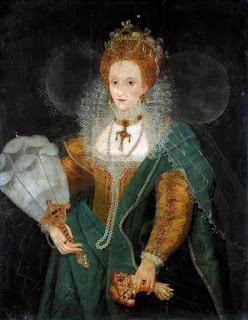 Elizabeth herself had a liking for candies and sugar fruits. The Sergeant of the Pastry (what a great title!) gave her a christmas 'pye of quynses and wardyns guilt'. In other words a gilded pie of quince and plums.
Everyone in her household was expected to give her a gift for the New Year, the more lavish the better, as your gift indicated your status. The gifts are well documented and include a gift even from her dustman, who gave her 'two bolts of camerick' (cambric) in 1577 . In the same year Sir Philip Sidney gave her 'a smock of camerick, wrought with black silk in the collor and sleves, the square and ruffs wrought with venice golde'. It seems the dustman's gift was somewhat outclassed!
Other gifts she received were 'eighteen larkes in a cage' in 1578, and a fan of white and red feathers which included her portrait, from Sir Francis Drake in 1589.
You can see that she is wearing an amber necklace like the one described in Shakespeare's verse, and carrying embroidered gloves and a feather fan in this portrait. Were any of them Christmas gifts I wonder?
For the artisan and lower classes it was the custom to send foodstuffs to your lord or master who owned the land you tenanted. Typical gifts included pigs, fowl, eggs, dried apples, cheeses or nuts and spices such as nutmegs and almonds. 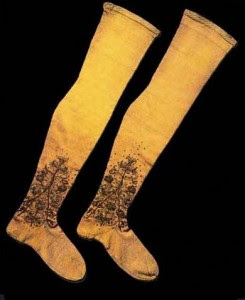 But what about the man in your life? Well, socks of course. Or hose to be more precise. On the left you can see a pair of embroidered hose made for a small boy. Thanks to www.genevieve-de-valois.com for this picture.
~~~~~~~~~~~~~

Deborah Swift's book "The Lady's Slipper" is available in the UK and in the US.
'Highly recommended.' The Historical Novels Review
'Top Pick!' RT Book Reviews
'Women's Fiction at its best' History and Women
'Brilliant saga' Romance Reviews today
''Rich and haunting' Reading the Past
'Riveting narrative' For the Love of Books
Deborah Swift at 11:04 PM
Share